ENHANCING CHEESE – HOW TO IMPROVE HEALTH BENEFITS FOR CONSUMERS

WHAT IS ENRICHMENT OF FOODS?

Iodine deficiency can cause serious health problems like thyroid diseases and mental damage and is now still affecting millions of people worldwide. However, in many nations the problem is almost non-existent due to the addition of iodine to table salt which ensures its intake. In a similar manner, beneficial ingredients can be added to regularly eaten foods to make them healthier. This process is known as enrichment or fortification of foods.

The consumption of cheese is increasing worldwide and can therefore act as a great source of beneficial ingredients. In this article, I will go over some previous work, our current project and future prospects of the enrichment of cheese with polyphenols.

POLYPHENOLS AND THEIR HEALTH BENEFITS

Polyphenols are a class of compounds produced by plants for a wide range of functions from coloration to being antimicrobial. When eaten by humans, polyphenols act as antioxidants, which are important for human health as they counter the natural oxidative stress effect in the body. This oxidative stress is believed to be a key factor in aging and some degenerative diseases such as Alzheimer’s, Parkinson’s disease and certain type of cancers. Therefore, consumption of antioxidant polyphenols could alleviate and hinder the development of such diseases. Polyphenols are commonly found in green tea, wine, cocoa, fruits, berries, vegetables and herbs and an addition of any of these to cheese would transfer the polyphenols’ benefits to cheese.

In our current project, we are attempting to enrich cheeses using berries with high concentration of polyphenols... 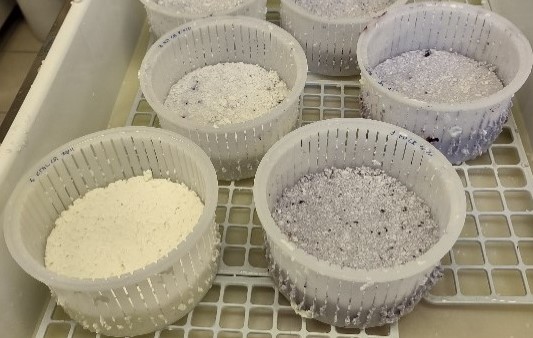 Some cheeses have already been enriched with a variety of ingredients including grapes, green tea, fruit juice powder and other berries as well as by-products from grapes, tomatoes and various vegetables. The addition of these ingredients does indeed increase the polyphenol concentrations and the antioxidant activity in the cheeses. In our current project, we are attempting to enrich cheeses using berries with high concentration of polyphenols, namely blackcurrant, cornelian cherry and elderberry.

We will also examine whether the ingredients affect the taste, appearance and general enjoyment of the cheese. In addition, we will observe whether the microbial community, essential for the fermentation of cheese, is affected by the enrichment.

Future experiments could upscale the production of enriched cheese from the experimental phase to the industrial production scale. Another interesting area of research is investigating whether the polyphenols maintain their antioxidant effect in the body after the ingestion of these enriched cheeses. There also exists other possible ways of enhancing polyphenols’ content in cheese. One way is by feeding cows or goats high-polyphenol concentration feed that will later be transferred to the milk. All in all, the enrichment of cheeses is an interesting way of delivering polyphenols to citizens and conferring their benefits.