Hello everyone! I’m Edoardo Doná, from Padua, Italy, and I’m 30 years old. I would like to tell you the story of my last eight months since they are the most life-changing of my entire life!

At the end of August 2021, I had the confirmation that I won a Marie-Curie Scholarship for a PhD, in the European FoodTraNet project. It’s a project that aims to develop new solutions in different fields in the food industry. The project involves 15 early-stage researchers (ESRs) from all over the world, involved in 15 PhDs in seven different Universities in Europe, and is divided into 3 different work packages (WP) that are:

I’m part of WP3, and the title of my PhD is "New chemical and bio-sensors for food quality and safety". I will develop sensors for food application based on the Sol-gel technique, to detect organophosphates pesticides, harmful compounds sprayed on the agricultural field to kill weeds, insects, parasites, weed fungi and any other living organisms that can ruin the harvest. For the PhD, I’m enrolled at the Jožef Stefan International Postgraduate School based in Ljubljana in the Sensor technologies course, but I will carry out my PhD at IOS, Institute for environmental protection and sensors in Maribor.

So at the beginning of October, I went to Maribor to choose an apartment. I have seen 5 apartments, and finally, I chose one near the city centre since I enjoy city life.

I left Italy with my girlfriend, with the destination of the beautiful city of Maribor (as you can see in the picture below), on the 31st of October. What awaited me was a centrifuge of events that would overwhelm me. But I didn’t leave Italy unprepared, and I brought with me two cars full of Italian food, just in case I missed Italy!

Speaking of my work, on the 2nd of November I started my PhD and my job at IOS. I met my mentor Prof. Aleksandra Lobnik, and all the other members of the companies. I visited the laboratories and began with bibliographic research. In mid-November, the first course started was “Science communication”, with Prof. Saša Novak. The course was very interesting, with interactive lectures, also with journalists and communication experts. We learned and prepared a press release, and understood how to communicate with a different audience. I think that for a scientist, communication is underestimated nowadays, but now more than ever has a crucial role in a more cohesive and fair society.

Meanwhile, I have applied to become student representative of my course, in the Student Council. Luckily, I have been elected, and also thanks to what I’ve learned in the Science Communication course, I proposed myself as the social media manager. Currently, I update the Facebook page weekly.

On the 9th and 10th of December, we had the Kick-off Meeting of the FoodTraNet project, planned in Ljubljana, but unfortunately, due to the COVID situation, it was entirely online, on Zoom. All the work packages were presented, and also all the early stage researcher projects. I had the opportunity to meet my colleague, but also professors and people from non-academic partners involved in the consortium like Barilla.

At the beginning of December, I started also the “Sensor technologies” course, where different professors present different topics. The course is centred on the Internet of Things technologies, and how the sensors are needed to achieve a future where artificial intelligence can organize the daily activities of a city, from industrial application to healthcare, passing by home automation and traffic management.

On the 25th of December, I went back to Italy for the Christmas holidays, and we arrived on time for the biggest lunch of the year with my parents, uncles and cousins.

After the New Year celebration, on the 2nd of January, I went back to Maribor, and on the 3rd I was back to the laboratory with renewed energy. I started with laboratories activities, and I prepared some sensors, to test them with Glyphosate, a toxic organophosphates used mainly in crops worldwide. To prepare the solution of the pesticide I had to wear a protective mask, similar to the ones they wear in apocalyptic movies, as you can see in the picture. 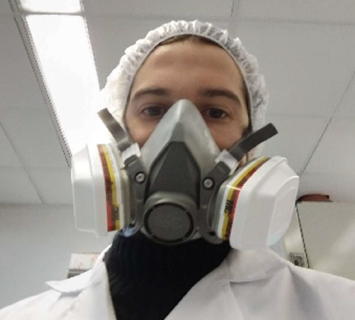 Protection required to allow me to prepare pesticides!

Although I worked hard between January and February, the results I had hoped for did not come in, and I had to put aside lab work for about two months and a half to prepare for the Sensor Technologies and Seminar 1 exams. In the first exam, I presented what other techniques can be used in a sensor, apart from fluorescence which I am using, to detect pesticides. In Seminar 1, on the other hand, I presented an introduction to my PhD, with bibliographical references to the state of the art, what the next steps will be, and possible developments in the near future.

But before starting exams, I went to the renowned Ptuj carnival, called Kurentovanje, which every year is full of events, and revives old Slovenian traditions. This year, due to Covid, the event was on a smaller scale, and we were only able to watch the big parade of floats (pictured), with terrifying disguises. The parade runs through the whole town, ending at Ptuj Castle that stands on a small hill overlooking the entire valley. 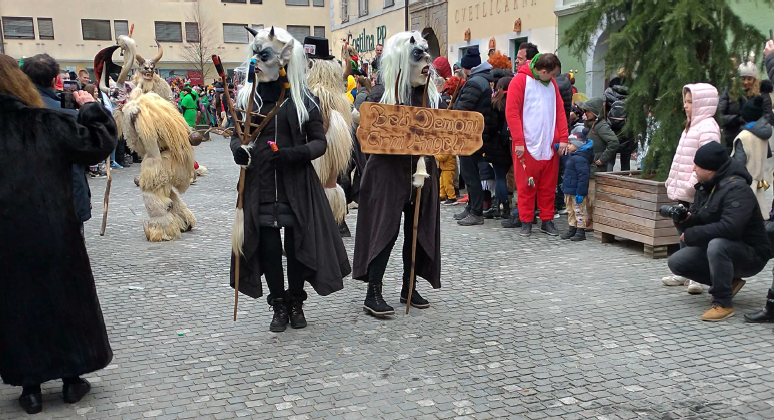 In recent months I have often been at the stadium to support Maribor, as I am a big football fan, and I could not miss the recent farewell to football of the most iconic and most goal-scoring player in the history of the Slovenian league, Marcos Tavares. It was a touching farewell, with the stadium almost full, with choirs, songs, fireworks and many emotions also during the match, where there was the touching intergenerational passing of the baton, between Marcos Tavares and his son, both on the pitch in the final minutes.

Watching the farewell match for Marcos Tavares at Maribor

Since mid-May, I have been able to devote myself to lab work again, and with a bit of luck, some interesting results may come in the next few months.

On 22nd June I finally got to meet my colleagues from the FoodTraNet project in person at the Edmund Mach Foundation in Trento for a three-day summer school. The journey started in Maribor by train with Athira, one ESR in Maribor, and then I joined part of the crew in Ljubljana. There was then a long journey along the sunny Italian motorways, which led us shortly before evening to Trento. Fortunately, the day ended with an enchanting sunset in the mountains, and an aperitif with some ESRs in Piazza Duomo, and you couldn't have asked for better. It was a hectic three days, but luckily we managed to find some time to get to know each other better and socialise, and even have a bit of a party! The lectures covered different topics, trying to look at our everyday work with different eyes. But what struck me most, and perhaps shouldn't have, was the huge difference between being online on Zoom, to which this pandemic had got us all a bit used by now, and instead sharing space and time together. Emotions, feelings, dialogues and landscapes take on colour, giving a sweet taste to these three days. Time, alas, is a tyrant, and these days flew by, but luckily we will all see each other again soon in Maastricht!

Microplastics in water & reuse in crops